I've had an idea.

Duckweed grows at an amazing rate. It also seems to spread out to take up the entire surface available to it. This appears to be a function of surface tension. But I may well be wrong so don't quote me on that. In fact, don't quote me on anything.

Because of the way duckweed spreads out over it's available surface, it should be possible to use that, and various other handy attributes of the universe, to make an Aquaponics duckweed auto feeder. 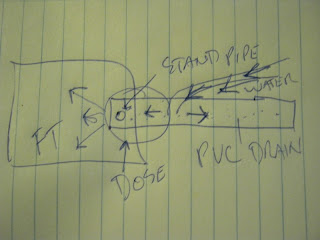 The pump for my new aquaponics system will be on a timer, and will run for around 10-15 minutes each hour. When it runs, a small amount could be diverted to the duckweed auto feeder. The diverted stream could be applied to a PVC pipe  in such a way as to divide the floating duckweed. If required, the stream could be shaped so it spreads across the width of the PVC, and perhaps points away from the standpipe. If the stream is set to spray across the top of the water, it will keep the majority of the duckweed away from the standpipe, but still allow the water to pass under the stream,through the standpipe and into the fish tank.

Once it's set up, it should largely regulate itself.

My plan is to make a large bed of water to grow duck weed in, using goat dung for nutrient, and create a duckweed auto feeder connected to my fish tank, that I can scoop some duckweed into every few weeks.

120 Things in 20 years
South Australia, Australia
I like stuff. My skills include being able to move slowly forward in time, and if I really concentrate, I can sometimes tell what I'm thinking.